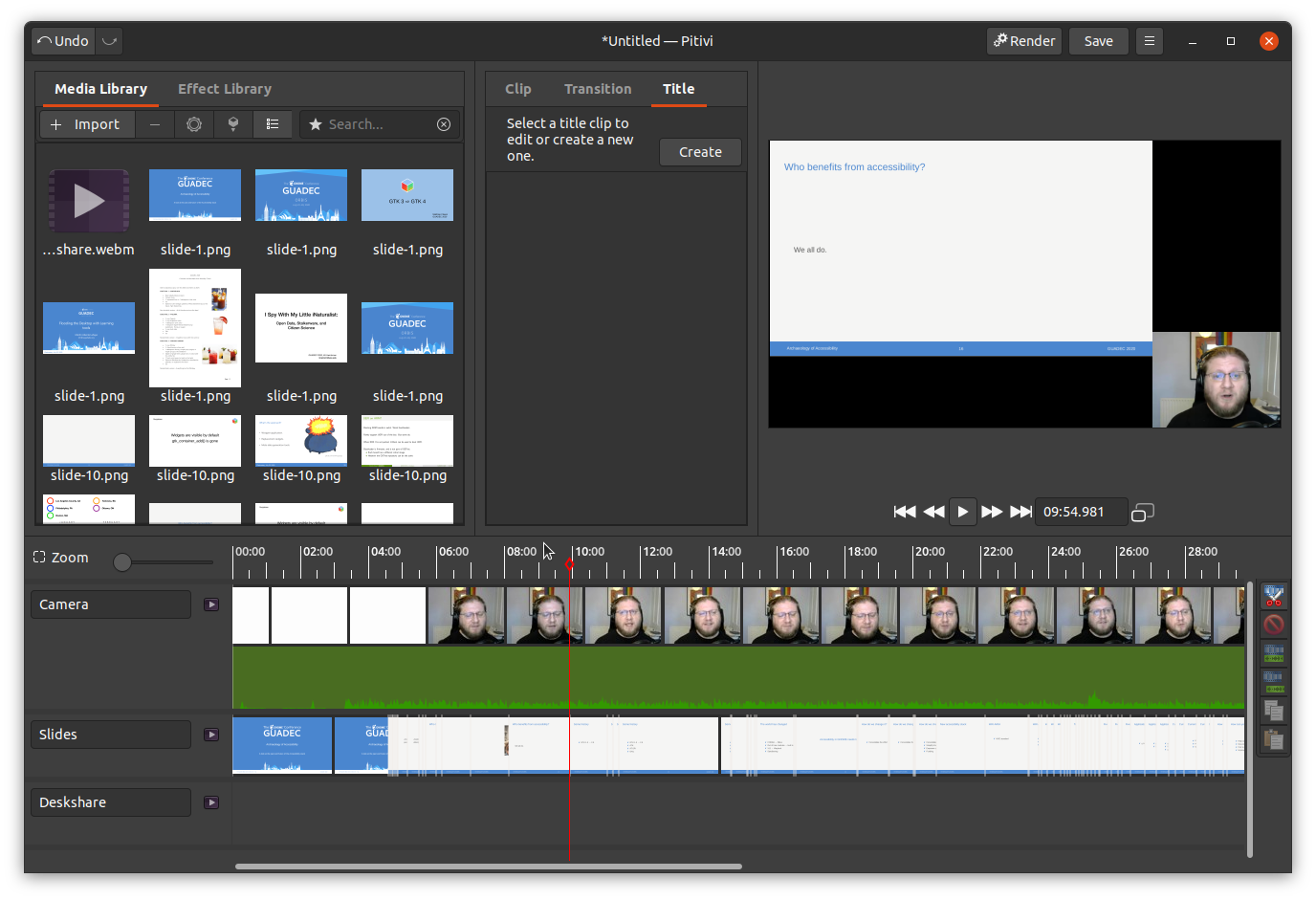 With a GLib implementation of the Python asyncio event loop, I can easily mix asyncio code with GLib/GTK code in the same thread. The next step is to see whether we can use this to make any APIs more convenient to use. A good candidate is APIs that make use of GAsyncResult.

These APIs generally consist of one function call that initiates the asynchronous job and takes a callback. The callback will be invoked sometime later with a GAsyncResult object, which can be passed to a “finish” function to convert this to the result type relevant to the original call. This sort of API is a good candidate to convert to an asyncio coroutine.

We can do this by writing a ready callback that simply stores the result in a future, and then have our coroutine await that future after initiating the job. For example, the following will asynchronously connect to the session bus:

We’ve now got an API that is conceptually as simple to use as the synchronous Gio.bus_get_sync call, but won’t block other work the application might be performing.

Most of the code is fairly straight forward: the main wart is the two loop.call_soon_threadsafe calls. While everything is executing in the same thread, my asyncio-glib library does not currently wake the asyncio event loop when called from a GLib callback. The call_soon_threadsafe method does the trick by generating some dummy IO to cause a wake up.

One feature we’ve lost with this wrapper is the ability to cancel the asynchronous job. On the GLib side, this is handled with the GCancellable object. On the asyncio side, tasks are cancelled by injecting an asyncio.CancelledError exception into the coroutine. We can propagate this cancellation to the GLib side fairly seamlessly:

It’s important to re-raise the CancelledError exception, so that it will propagate up to any calling coroutines and let them perform their own cleanup.

By following this pattern I was able to build enough wrappers to let me connect to the D-Bus daemon and issue asynchronous method calls without needing to chain together large sequences of callbacks. The wrappers were all similar enough that it shouldn’t be too difficult to factor out the common code.

To help keep myself honest, I wanted to set up automated test runs on a few personal projects I host on Github.  At first I gave Travis a try, since a number of projects I contribute to use it, but it felt a bit clunky.  When I found Github had a new CI system in beta, I signed up for the beta and was accepted a few weeks later.

The main differences I could see between the two systems are:

For a second project (videowhisk), I am running the tests against the VM’s default Python image.  For this project, I’m more interested in compatibility with the distro release’s GStreamer libraries than compatibility with different Python versions.  I suppose I could extend this using the matrix feature to test on multiple Ubuntu versions, or containers for other Linux releases.

While I’ve just been using this to run the test suite, it looks like Actions can be used for a lot more.  A project can have multiple workflows with different triggers, so it can also be used for automated triage of bugs or pull requests (e.g. request a review from a specific developer when a pull request is created that modifies files in a specific directory). It also looks like I could create a workflow to automatically publish to PyPI when I push a new tag to the repository that looks like a version number.

It will be interesting to see what this does to the larger ecosystem of “CI as a service” products built to work with Github.  On the one hand having a choice is nice, but on the other hand it’s nice to have something well integrated.  I really like Gitlab’s integrated CI system for projects I have hosted on various Gitlab instances, for example.

As an evening project, I’ve been working on a small library that integrates the GLib main loop with Python’s asyncio. I think I’ve gotten to the point where it might be useful to other people, so have pushed it up here:

This isn’t the only attempt to integrate the two event loops, but the other I found (Gbulb) is unmaintained and seems to reimplement a fair bit of the asyncio (e.g. it has its own transport classes). So I thought I’d see if I could write something smaller and more maintainable, reusing as much code from the standard library as possible.

My first step was writing an implementation of the selectors.BaseSelector interface in terms of the GLib main loop. The select() method just runs a GMainLoop with a custom source that will quit the loop if any of the file descriptors are ready, or the timeout is reached.

For the asyncio event loop, I was able to reuse the standard library asyncio.SelectorEventLoop with my new selector. In action, it looks something like this:

As far as testing goes, the Python standard library comes with a suite of tests parameterised on an event loop implementation. So I’ve just reused that as the bulk of my test suite, and done the same with the selector tests. There are a handful of test failures I still need to diagnose, but for the most part things just work.

Making an asyncio application use this event loop is simple:

The main limitation of this code is that it relies on asyncio running the GLib main loop. If some other piece of code runs the main loop, asyncio callbacks will not be triggered and will probably lead to busy looping. This isn’t a problem my project (an asyncio server making use of GStreamer), but would be a problem for e.g. a graphical application calling gtk_dialog_run().

With my old ThinkPad, Lenovo provided BIOS updates in the form of Windows executables or ISO images for a bootable CD.  Since I had wiped Windows partition, the first option wasn’t an option.  The second option didn’t work either, since it expected me to be using the drive in the base I hadn’t bought.  Luckily I was able to just copy the needed files out of the ISO image to a USB stick that had been set up to boot DOS.

When I got my new ThinkPad, I had hoped to do the same thing but found that the update ISO images appeared to be empty when mounted.  It seems that the update is handled entirely from an El Torito emulated hard disk image (as opposed to using the image only to bootstrap the drivers needed to access the CD).

So I needed some way to extract that boot image from the ISO.  After a little reading of the spec, I put together the following Python script that does the trick:

It isn’t particularly pretty, but does the job and spits out a 32MB FAT disk image when run on the ThinkPad X230 update ISOs. It is then a pretty easy task of copying those files onto the USB stick to run the update as before. Hopefully owners of similar laptops find this useful.

There appears to be an EFI executable in there too, so it is possible that the firmware update could be run from the EFI system partition too.  I haven’t had the courage to try that though.