My granny asked me to bring her a driver for her all-in-one scanner thingy, because it would take her too long to download it. Well, I wasn’t too sure whether it’s HP’s fault by not supporting the generic classes or Windows 7‘s fault by not implementing the USB Printer or Scanner class driver (But they should). However, I didn’t think a driver can be that huge. However, HP supposes you to download 290 whopping MB! For making their product work! But they are serious. You cannot download anything smaller than that. ๏̯͡๏ I thought they were kidding me. Must be a very complicated device… Well, I’m copying their BLOBs onto a pendrive now…

﻿﻿During GUADEC, I of course wanted to use my N900. But since the PR1.2 update, the Jabber client wouldn’t connect to the server anymore, because OpenSSL doesn’t honor imported CAs. So the only option to make it connect is to ignore SSL errors. But as I’m naturally paranoid, I didn’t dare to connect… It’s a nerdy conference with a lot of hackers after all.

Fortunately, I had all those nice Collaborans next to me and I could ask loads of (stupid?) questions. Turns out, that the Jabber client (telepathy-gabble) on the N900 is a bit old and uses loudmouth and not wocky.

So I brought my SDK back to life (jeez, it’s very inconvenient to do stuff with that scratchbox setup 🙁 ) and I was surprised that apt-get source libloudmouth1-0 was sufficient to get the code. And apt-get build-dep libloudmouth1-0 && dpkg-buildpackage -rfakeroot built the package. Almost easy (I had to fix loads of dependency issue but it then worked out).

As neither I nor the Collaborans knew how to integrate with the Certificate Manager, I just wanted to make OpenSSL aware of the root CA which I intended to drop somewhere in ~/.certs or so.

After a couple of busy conference days I found out that code which implements the desired functionality already exists but was commented out. So I adapted that and now loudmouth imports certificates from /home/user/.config/telepathy/trusted-cas.pem or /home/user/.config/telepathy/certs /home/user/.maemosec-certs/ssl-ca before it connects. The former is just a file with all root CAs being PEM encoded. The latter is a directory where you have to put PEM or DER encoded certs into and then run c_rehash . in it the certificate manager puts the certificates in after you’ve imported it. Because just loading any .pem or .der file would have been to easy to work with. It was hard for me to understand OpenSSL’s API. This article helped me a bit though, so you might find it useful, too.

So if you want your jabber client on the N900 to connect to a SSL/TLS secured server that uses a root CA that is not in the built in certificate store, grab the .deb here. You can, of course, get the source as well.

Turns out, that there is a workaround mentioned in bug 9355 hence you might consider it to be easier to modify system files yourself instead of letting the package manager do it.

I had the pleasure to be invited to the MetaRheinMain ChaosDays 1001b (mrmcd1001b) in Darmstadt. This years motto was “Beyond Science Fiction” and ~250 people gathered together to discuss “Society and Technology in 20th century fiction and 21th century reality”. The presented talks were mostly interesting, although I didn’t attend that many. I spent most of the time talking to people or giving (two) talks myself: Security in Mobile Devices and Virtualised USB Fuzzing.

The first one went as expected and I think the attendees enjoyed it very much. Again, talking about technical details that a buffer overflow on x86 involves is not that much fun but I think it went at least alrightish. Slides can be found here.

The second talk was kind of a rehearsal for my final thesis presentation. So I took the chance to prepare myself for Dublin and present brand new stuff^tm. I started off crashing a Linux PC with my N900 and went then to the talk. It was a bit confusing, I guess. But in fairness: It was very late in every sense of the word 😉 But I got positive feedback nonetheless so it’s better if you make up your own mind with the slides. Although I don’t think the slides alone are that interesting.

For some reason, people were interested in the commands that I’ve used for the demo:

Do you in or near Berlin? Or just happen to be there on 2010-09-11? Then go out for once! It’s good for your body, your mind and society. Again, Freedom Not Fear will take place and you are most welcome to join! You’re not in Berlin, great! Freedom not Fear will also take place in

We call for an independent review of all existing surveillance powers as to their effectiveness, proportionality, costs, harmful side-effects and alternative solutions. We particularly call on the European parliament to immediately re-evaluate existing and planned projects on interior security that restrict fundamental rights of the people in Europe.

Following the “arms race” in security measures over the past few years, we demand an immediate stop to new interior security laws that further restrict civil liberties.

4. Ensure freedom of expression, dialogue and information on the Internet 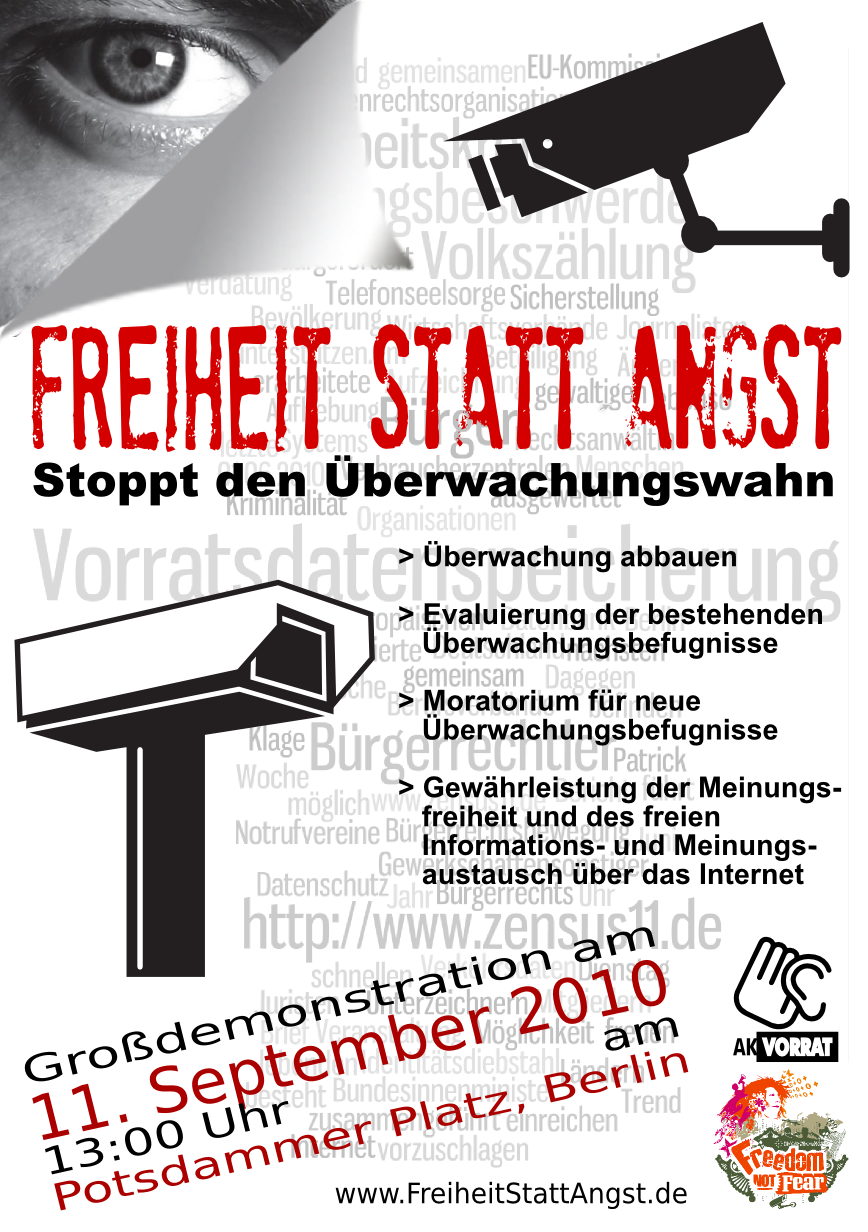