I was invited to this year’s OpenSuSE Conference in Nuremberg, Germany. I had been to that event two years ago in Dubrovnik which I enjoyed so much that I was eager to go again. 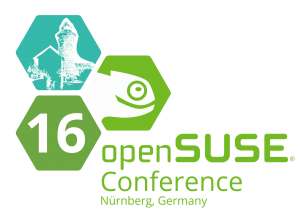 The venue was very easy to find due to poster hanging everywhere. The flow of information was good in general. That includes emails being every day which highlighted items in the schedule or restaurant recommendations for the evening.

I arrived just in time for my first show on GNOME Keysign. For better or worse we only very few people so we could discuss matters deeply. It was good, because we found bugs and other user facing issues that need to be resolved. The first and most obvious one was GnuPG 2.1 support. Although still experimental, OpenSuSE ships 2.1 by default. The wrapping library we’re using to interact with GnuPG did not support calling the newer gpg, so we had to identify the issues, find a fix, and test. It eventually worked out 🙂

I also had a talk called “Five years after 3.0” which, to my surprise, has been covered by reddit and omgubuntu. I was also surprised by the schedule which only gave me 30 minutes instead of the usual 45 or 60. I was eventually politely reminded that I have significantly exceeded my time *blush*. We thus needed to move discussions outside which was fruitful. People at OpenSuSE Con are friendly and open-minded. It’s a pleasure to have arguments there 🙂

I didn’t actually see many talks myself. Although the schedule was quite full with interesting topics! But knowing that the VoCCC people were running the video recordings, I could count on recordings being available after a few days hours.

But I have had very interesting and enlightening discussions about distributions, containerised apps, Open Build Service, OpenQA, dragging more GNOME people towards OpenSuSE, Fonts, and other issues. That’s the great thing about conferences: You get to know people with interesting stories. As for the fonts, for example, I was discussing the complexity involved in rendering glyphs and whether this could eventually lead to security problems. I think the attack surface of fonts has been undervalued and needs some investigation. I hope I can invest some time in looking at building and modifying fonts. I also found it interesting to discuss why I would not recommend OpenSuSE as a GNU/Linux distribution to anyone, mainly because I need to reflect and challenge myself. Turns out, I don’t have any good reason except that my habits simply don’t include using OpenSuSE myself and I am thus unable to give a recommendation. I think they have interesting infrastructure though. I see the build service for having peoples’ apps built and OpenQA for having them tested. Both seem to be a little crude overall, but could become the tools to use for distributing your flatsnappimgpack. An idea was circling around to have a freedesktop.org for those app image formats and execution environments. But in a somewhat more working state. I think key to success of any such body is being lightweight and not end up like openstack. Let’s hope we can bring people who work on various parts or even implementation of containerisation for desktop applications together. I also hope that the focus for containered desktop apps will be isolation from other apps rather than actually distributing the software, because I don’t think we have a big problem with getting Free Software into the user’s hands.

So a big “thank you” to this year’s organisers for this event. I hope I can attend on of the following conferences 🙂