I keep forgetting about blogging about the progress we’re making with GNOME Keysign. Since last time I reported several new cool developments happened. This 0.7 release fixes a few bugs and should increase compatibility with recent gpg versions.

The most noticeable change is probably a message when you don’t have a private key. I tried to create something clickable so that the user would be presented, say, seahorse with the relevant widgets that allows the user to quickly generate an OpenPGP key. But we currently don’t seem to be able to do that. It’s probably worth filing a bug against Seahorse. 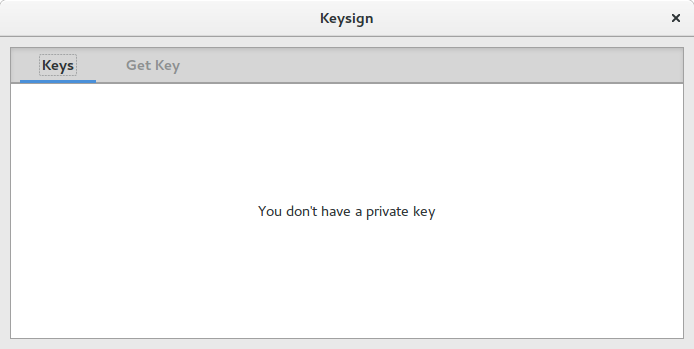 You may also that the “Next” or “Back” button is now sensitive to the end of the notebook. That is a minor improvement in the UI.

In general, we should be more Python 3 compatible by removing python2-only code in various modules.

Another change is a hopefully more efficient bar code rendering. Instead of using mixed case characters, the newer version tries to use the alphanumeric mode which should use about 5.5 bits per character rather than 8. The barcode reading side should also save some CPU cycles by activating zbar’s cache.