It’s been a while since I reported on GNOME Keysign. The last few releases have been exciting, because they introduced nice features which I have been waiting long for getting around to implement them.

So GNOME Keysign is an application to help you in the OpenPGP Keysigning process. That process will eventually require you to get hold of an authentic copy of the OpenPGP Key. In GNOME Keysign this is done by establishing a TCP connection between two machines and by exchanging the data via that channel. You may very well ask how we ensure that the key is authentic. The answer for now has been that we transmit the OpenPGP fingerprint via a secure channel and that we use the fingerprint to authenticate the key in question. This achieves at least the same security as when doing conventional key signing, because you get hold of the key either via a keyserver or a third party who organised the “key signing party”. Although, admittedly, in very rare cases you transfer data directly via a USB pendrive or so. Of course, this creates a whole new massive attack surface. I’m curious to see technologies like wormhole deployed for this use case.

The security of you going to the Internet to download the key is questionable, because not only do you leak that you’re intending to communicate with a certain person, but also expose yourself to attacks like someone dropping revocation certificates or UIDs of the key of your interest. While the former issue is being tackled by not going to the Internet in first place, the latter had not been dealt with. But these days are over now.

As of 0.5 GNOME Keysign also generates an HMAC of the data to be transferred and encodes that in the QR Code. The receiving end can then verify whether the data downloaded matches the expected value. I am confident that a new generation hash function serves the same purpose, but I’m not entirely sure how easy it is to get Keccak or siphash into the users’ hands. The HMAC, while being cryptographic overkill, should be fine, though. But the construction leaves a bad taste, especially because a known key is currently used to generate the HMAC. But it’s a mechanism built-in into Python. However, I expect to replace that with something more sensible.

In security, we better imagine a strong attacker who is capable of executing attacks which we think are not necessarily easy or even possible to mount. If we can defend against such a strong attacker then we may trust the system to resist weaker attacks, too. One of such a difficult attack, I think, is to inject just one frame while, at the same time, controlling the network. The attack could then make the victim scan a rogue barcode which delivers a rogue MAC which in turn validates the wrong data. Such an attack should not go unnoticed and, as of 0.5, GNOME Keysign will display the frame that contained the barcode. 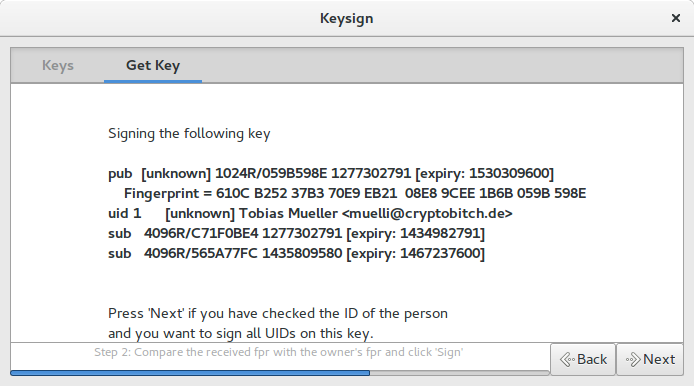 And now you can see the frame that got decoded. This is mainly because the GStreamer zbar element also provides the frame. 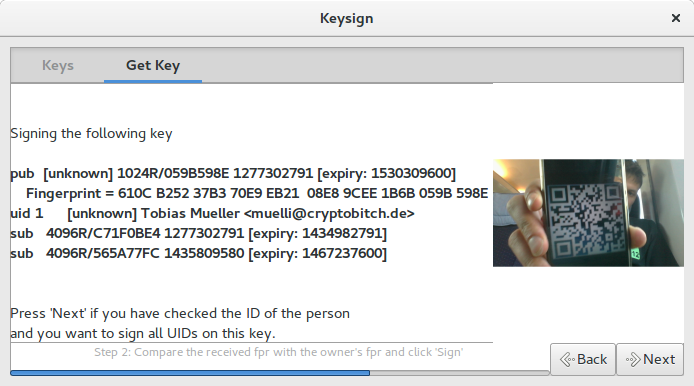 Another interesting feature is the availability of a separate tool for producing signatures for a given key in a file. The scenario is that you may have received a key from your friend via a (trusted, haha) pendrive, a secure network connection (like wormhole), or any other means you consider sufficiently integrity preserving. In order to sign that key you can now execute something like python -m keysign.gnome-keysign-sign-key in order to run all the signing logic but without the whole key transfer stuff. This is a bit experimental though and I am not yet happy about the state that program is in, so it’s not directly exposed to users by installing it as executable.

GNOME Keysign is available in OpenSuSE, now. I don’t know the exact details of how to make it work, but rumour has it that you can just do a zypper install gnome-keysign. While getting there we identified a few issues along the way. For example, the gstreamer zbar element needs to be present. But that was a problem, because the zbar element was not built because the zbar library was not available. So that needed to get in first. Then we realised that the most modern OpenSuSE uses a very recent GnuPG which the currently used GnuPG library is not handling so nicely. That caused a few headaches. Also, the firewall seems to be an issue which needs to be dealt with. So much to code, so little time! 😉