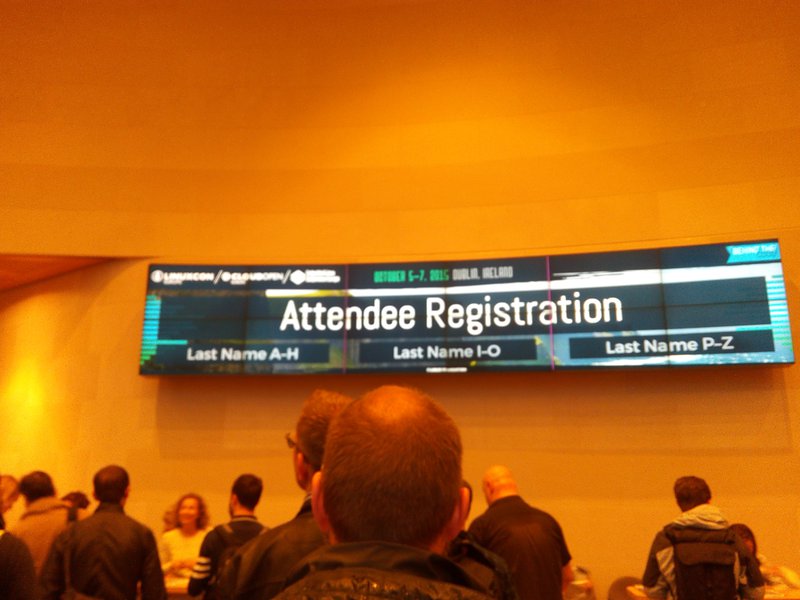 The conference was opened by the LinuxFoundation’s Executive Jim Zemlin. He thanked the FSF for their 30 years of work. I was a little surprised to hear that, given the differences between OpenSource and Free Software. He continued by mentioning the 5 Billion Dollar report which calculates how much “value” the projects hosted at Linux Foundation have generated over the last five years. He said that a typical product contains 80%, 90%, or even more Free and Open Source Software. He also extended the list of projects by the Real Time Collaborative project which, as far as I understood, effectively means to hire Thomas Gleisxner to work on the Real Time Linux patches. 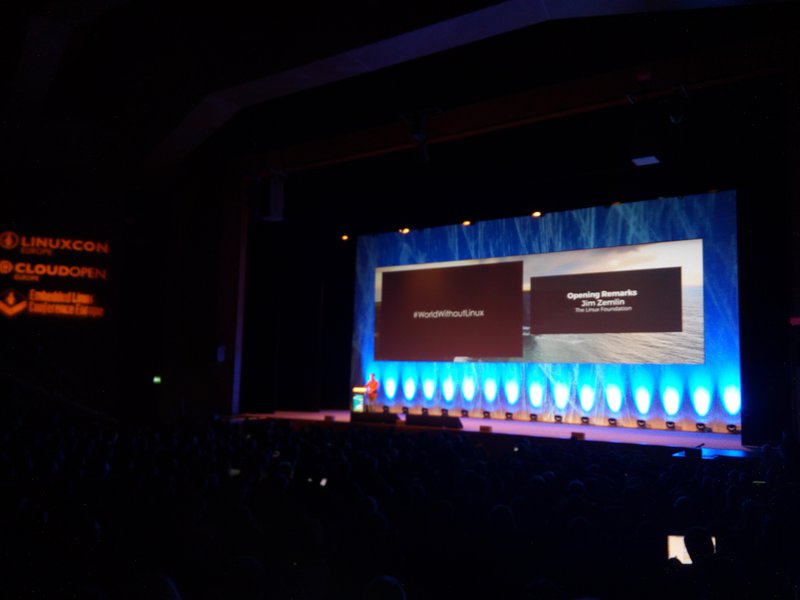 The next, very interesting, presentation was given by Sean Gourley, the founder of Quid, a business intelligence analytics company. He talked about the limits of human cognition and how algorithms help to exploit these limits. The limit is the speed of your thinking. He mentioned that studies measured the blood flow across the brain when making decisions which found differences depending on how proficient you are at a given task. They also found that you cannot be quicker than a certain limit, say, 650ms. He continued that the global financial market is dominated by algorithms and that a fibre cable from New York to London costs 300 million dollars to save 5 milliseconds. He then said that these algorithms make decisions at a speed we are unable to catch up with. In fact, the flash crash of 2:45 is inexplicable until today. Nobody knows what happened that caused a loss of trillions of dollars. Another example he gave was the crash of Knight Capital which caused a loss of 440 million dollars in 45 minutes only because they updated their trading algorithms. So algorithms are indeed controlling our lives which he underlined by saying that 61% of the traffic on the Internet is not generated by humans. He suggested that Bots would not only control the financial markets, but also news reading and even the writing of news. As an example he showed a Google patent for auto generating social status updates and how Mexican and Chinese propaganda bots would have higher volume tweets than humans. So the responsibilities are shifting and we’d be either working with an algorithm or for one. Quite interesting thought indeed. 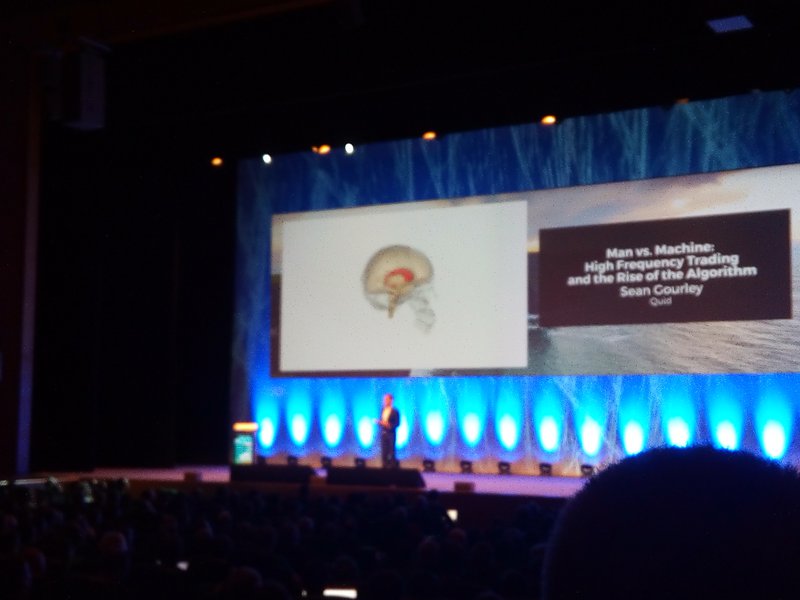 Next up was IBM on Transforming for the Digital Economy with Open Technology which was essentially a gigantic sales pitch for their new Power architecture. The most interesting bit of that presentation was that “IBM is committed to open”. This, she said, is visible through IBM’s portfolio and through its initiatives like the IBM Academic Initiative. OpenPower Foundation is another one of those. It takes the open development model of software and takes it further to everything related to the Power architecture (e.g. chip design), she said. They are so serious about being open, that they even trademarked “Open by Design“… 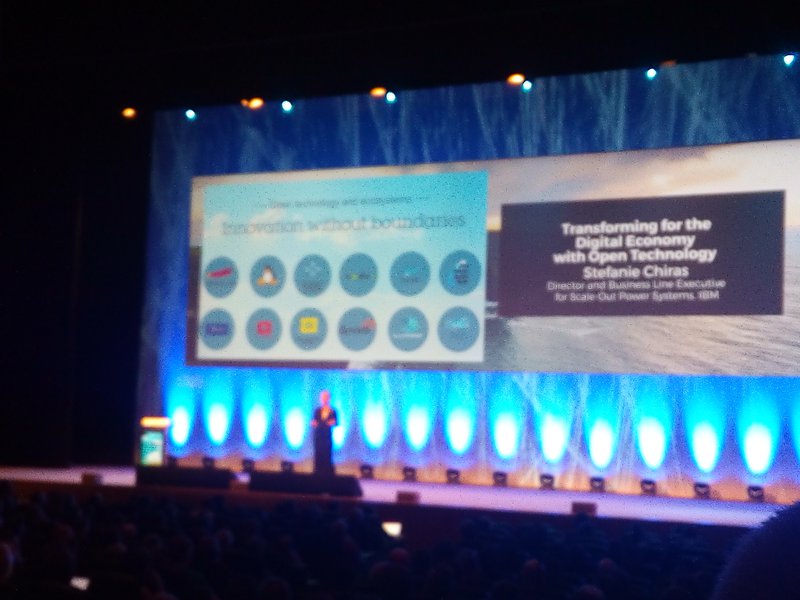 Then, the drone code people presented on their drone project. They said that they’ve come a long way since 2008 and that the next years are going to fundamentally change the drone scene as many companies are involved now. Their project, DroneCode, is a stack from open hardware to flight control and the next bigger thing will be CAN support, which is already used in cards, planes, and other vehicles. The talk then moved to ROS, the robot operating system. It is the lingua franca for robotic in academia. 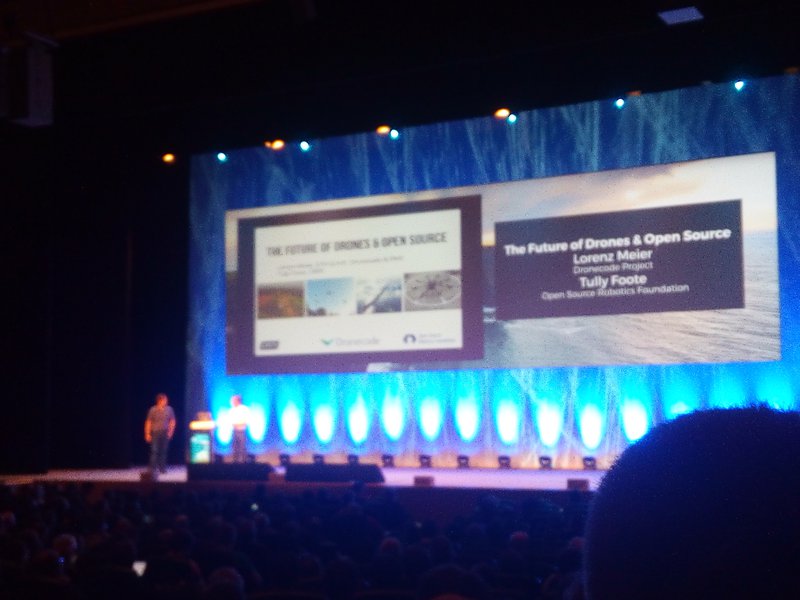 Matthew Garret talked on securing containers. He mentioned seccomp and what type of features you can deprive processes of. Nowadays, you can also reason about the arguments for the system call in question, so it might be more useful to people. Although, he said, writing a good seccomp policy is hard. So another mechanism to deprive processes of privileges is to set capabilities. It allows you to limit the privileges in a more coarse grained way and the behaviour is not very well defined. The combination of capabilities and seccomp might have surprising results. For example, you might be allowing the mknod() call, but you then don’t have the capability to actually execute it or vice versa. SELinux was next on his list as a mechanism to secure your containers. He said that writing SELinux policy is not the most fun thing in the world. Another option was to run your container in a virtual machine, but you then lose some benefits such as introspection of fine grained control over the processes. But you get the advantages of more isolation. Eventually, he asked the question of when to use what technology. The performance overhead of seccomp, SELinux, and capabilities are basically negligible, he said. Fully virtualising is usually more secure, he said, but the problem is that you have more complex infrastructure which tend to attract bugs. He also mentioned GRSecurity as a means of protecting your Linux kernel. Let’s hope it’ll be merged some day. 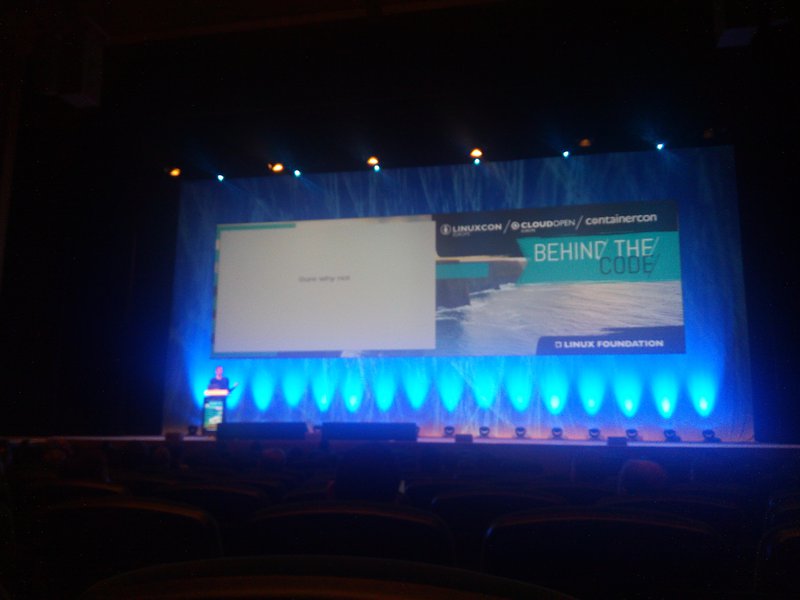 Canonical’s Daniel Watkins then talked on cloud-init. He said it runs in three stages. Init, config, and final in which init sets up networking, config does the actual configuration of your services, final is for the things that eventually need to be done. The clound-init architecture is apparently quite flexible and versatile. You can load your own configuration and user-data modules so that you can set up your cloud images as you like. cloud-init allows you get rid of custom images such that you can have confidence in your base image working as intended. In fact, it’s working not only with BSDs but also with Windows images. He said, it is somewhat similar to tools like Ansible, so if you are already happily using one of those, you’re good. 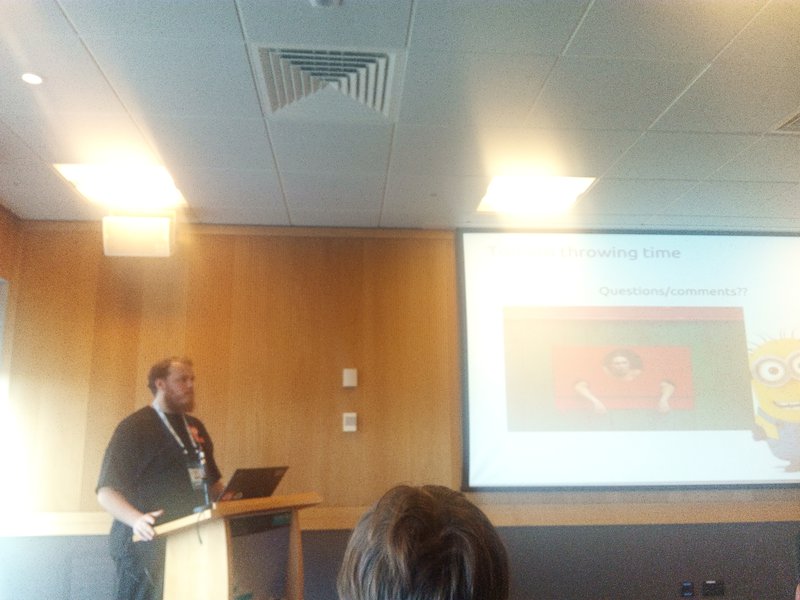 An entertaining talk was given by Florian Haas on LXC and containers. He talked about tricks managing your application containers and showed a problem when using a naive chroot which is that you get to see the host processes and networking information through the proc filesystem. With LXC, that problem is dealt with, he said. But then you have a problem when you update the host, i.e. you have to take down the container while the upgrade is running. With two nodes, he said, you can build a replication setup which takes care of failing over the node while it is upgrading. He argued that this is interesting for security reasons, because you can upgrade your software to not be vulnerable against “the latest SSL hack” without losing uptime. Or much of it, at least… But you’d need twice the infrastructure to run production. The future, he said, might be systemd with it’s nspawn tool. If you use systemd all the way, then you can use fleet to manage the instances. I didn’t take much away, personally, but I guess managing containers is all the rage right now. 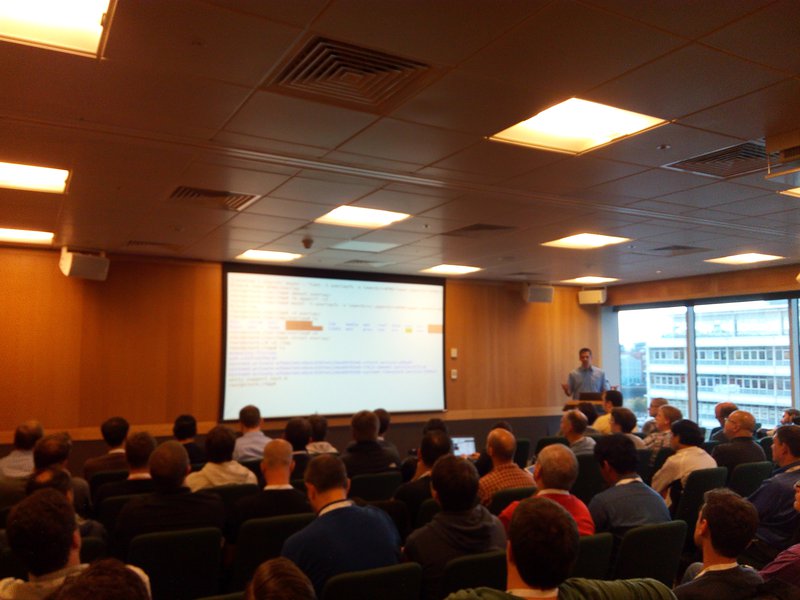 Next up was Michael Hausenblas on Filesystems, SQL and NoSQL with Apache Mesos. I had briefly heard of Mesos, but I really didn’t know what it was. Not that I’m an expert now, but I guess I know that it’s a scheduler you can use for your infrastructure. Especially your Apache stack. Mesos addresses the problem of allocating resources to jobs. Imagine you have several different jobs to execute, e.g. a Web server, a caching layer, and some number crunching computation framework. Now suppose you want to increase the number crunching after hours when the Web traffic wears off. Then you can tell Mesos what type of resources you have and when you need that. Mesos would then go off and manage your machines. The alternative, he said, was to manually SSH into the machines and reprovision them. He explained some existing and upcoming features of Mesos. So again, a talk about managing containers, machines, or infrastructure in general. 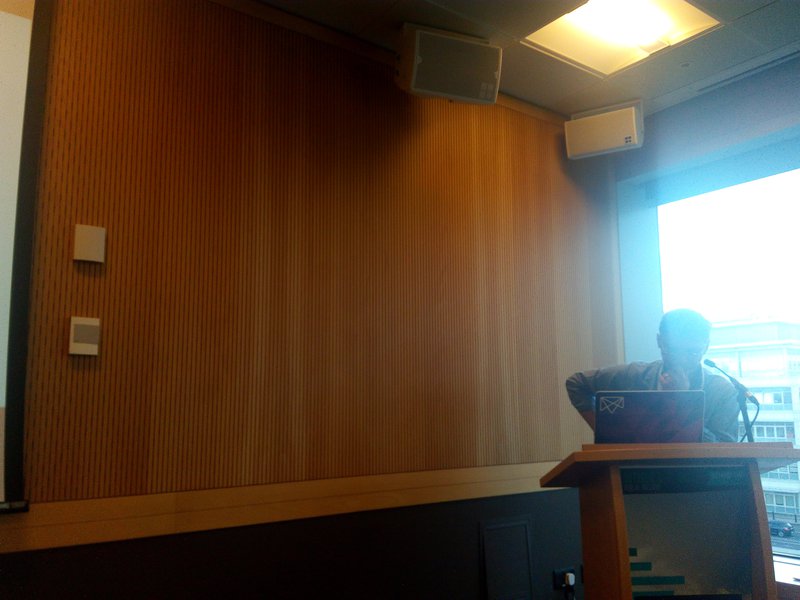 The following Kernel panel didn’t provide much information to me. The moderation felt a bit stiff and the discussions weren’t really enganged. The topics mainly circled around maintainership, growth, and community. 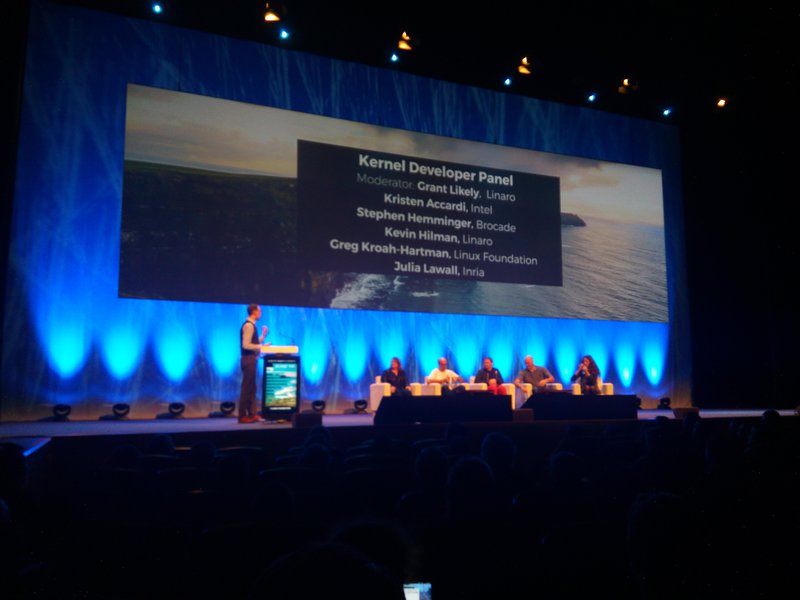 SuSE’s Ralf was then talking on DevOps. He described his DevOps needs based on a cycle of planning, coding, building, testing, releasing, deploying, operating, monitoring, and then back to planning. When bringing together multiple projects, he said, they need to bring two independent integration loops together. When doing DevOps with a customer, he mentioned some companies who themselves provide services to their customers. In order to be successful when doing DevOps, you need, he said, Smart tools, Process automation, Open APIs, freedom of choice, and quality control are necessary. So I guess he was pitching for people to use “standards”, whatever that exactly means. 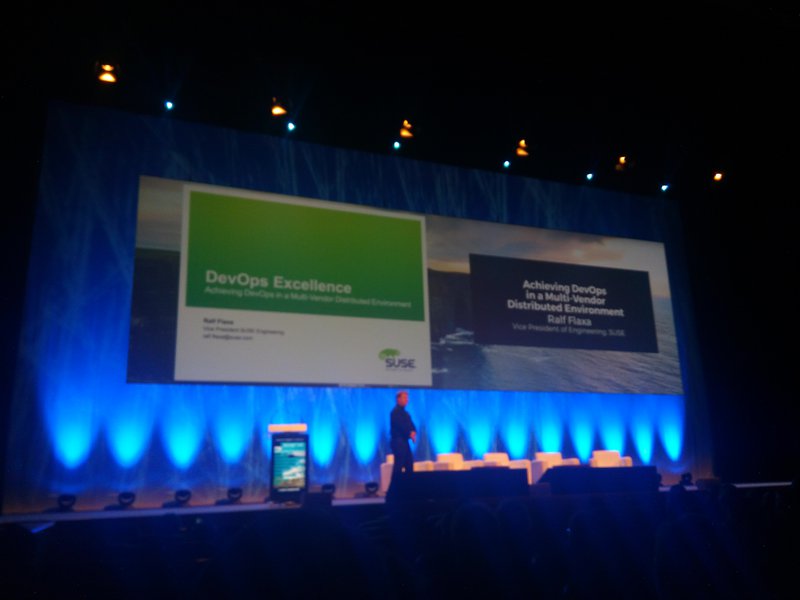 I awaited the next talk on Patents and patent non aggression. Keith Bergelt, from OIN talked about ten years of the Open Invention Network. He said that ten years ago Microsoft sued Linux companies to hinder Linux distribution. Their network was founded to embrace patent non-aggression in the community. A snarky question would have been why it would not be simply enough to use GPLv3, but no questions were admitted. He said that the OIN has about 1750 licensees now with over a million patents being shared. That’s actually quite impressive and I hope that small companies are being protected from patent threats of big players… 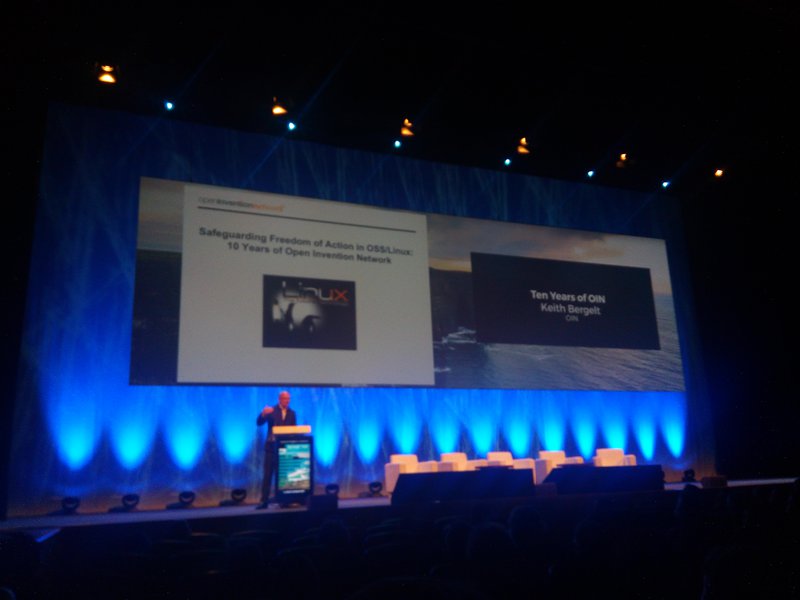 That concluded the first day. It was a lot of talks and talking in the hallway. Video recordings are said to be made available in a couple of weeks. So keep watching the conference page. 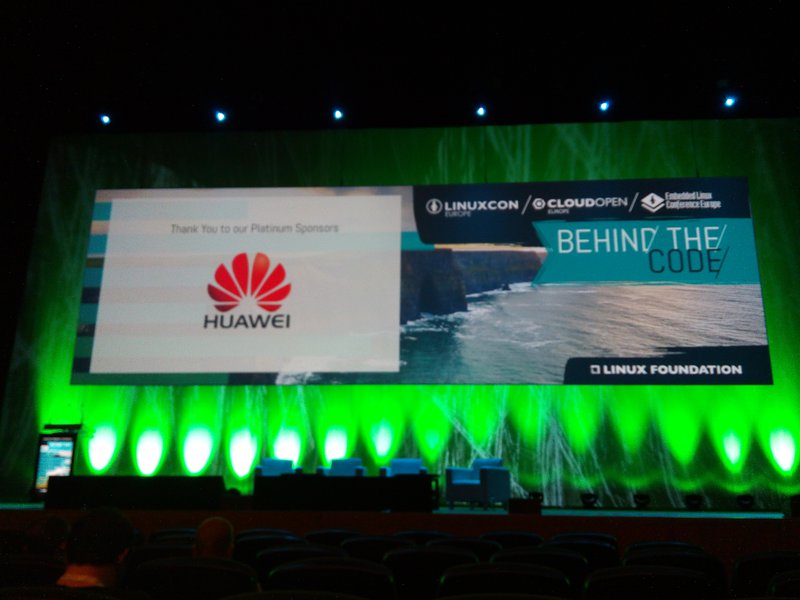 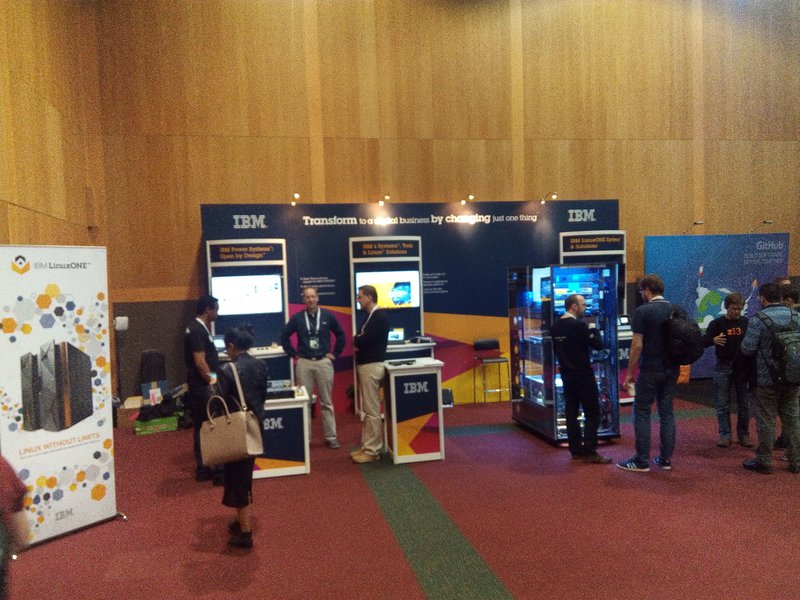