While at linux.conf.au earlier this year, I started hacking on a Mandelbrot Set fractal renderer implemented in JavaScript as a way to polish my JS skills.  In particular, I wanted to get to know the HTML5 Canvas and Worker APIs.

The results turned out pretty well.  Click on the image below to try it out: 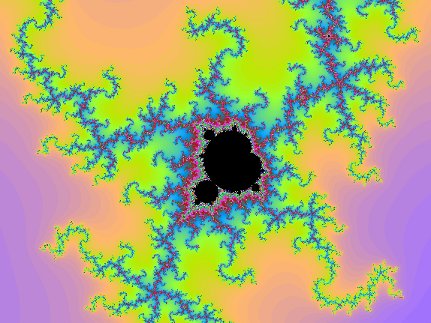 Clicking anywhere on the fractal will zoom in.  You’ll need to reload the page to zoom out.  Zooming in while the fractal is still being rendered will interrupt the previous rendering job.

All the calculations are done via web workers, so should not block the UI.  The algorithms used to calculate these types of fractals are easy to parallelise, so it was not particularly difficult to add more workers.  One side effect of this is that the lines of the fractal don’t always get rendered in order.

With Chromium, this maxes out all six cores on my desktop system.  In contrast, Firefox only keeps three cores busy.  As workers are not directly tied to operating system threads, this may just mean that Firefox allocates fewer threads for running workers.  I haven’t tested any other browsers.

Browser technology certainly has progressed quite a bit in the last few years.

Recently I’ve been working on a Firefox extension, and needed a way to test the code.  While testing code is always important, it is particularly important for dynamic languages where code that hasn’t been run is more likely to be buggy.

I had not experience in how to do this for Firefox extensions, so Eric suggested I try out Mozmill. which has been quite helpful so far.  There were no Ubuntu packages for it, so I’ve put some together in my PPA for anyone interested:

The packages are not quite up to the standard needed to go into Ubuntu yet (among other things, there are no man pages for the various commands), but they do work and shouldn’t eat your system.

Running mozmill tests is pretty easy, and can be done with a command like the following:

While many of the mozmill tests that Mozilla has written are relatively high level, essentially treating it as an user input automation system, you have full access to Mozilla’s component architecture, so the framework seems well suited to lower level unit testing and functional tests.

There is a “jumlib” module that you can import into your tests that provides familiar helpers like assertEquals(), etc.  One difference in their behaviour to what I am used to is that they don’t interrupt the test on failure.  On the plus side, if you’ve got a bunch of unrelated assertions at the end of your test, you will see all the failures rather than just the first.  On the down side, you don’t get a stack trace with the failure so it can be difficult to tell which assertion failed unless you’ve provided a comment to go with each assertion.

The framework seems to do the job pretty well, although the output is a little cluttered.  It has the facility to publish its test results to a special dashboard web application, but I’d prefer something easier to manage on the command line.

I’ve just got through the first one and a half days of LCA2011 in Brisbane. The organisers have done a great job, especially considering the flooding they have had to deal with.

Due to the venue change the accommodation I booked is no longer within walking distance of the conference, but the public transport is pretty good.  A bit more concerning was the following change to the wiki made between the time I left Perth and the time I checked in:

I’ve been impressed with the conference talks I’ve been to so far. In particular, I liked Silvia Pfeiffer’s talk on audio/video processing with HTML5 – I’ll have to have a play with some of this. Today’s keynote was by Vint Cerf about the history of internet protocols and what the challenges will be in the future (e.g. InterPlaNet).

There was a talk today about Redis: it sounded like interesting technology, but the talk didn’t really give enough information to say when you’d choose it over other systems.