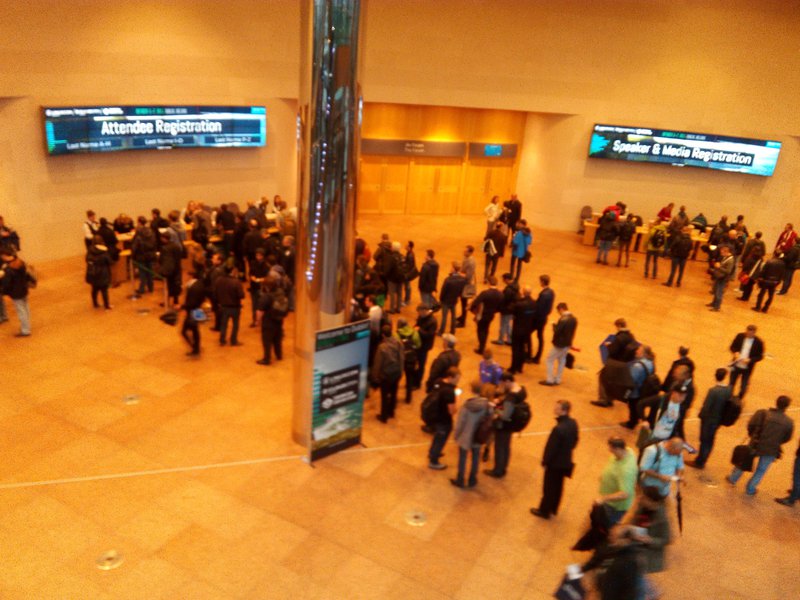 The second day was opened by Leigh Honeywell and she was talking about how to secure an Open Future. An interesting case study, she said, was Heartbleed. Researchers found that vulnerability and went through the appropriate vulnerability disclosure channels, but the information leaked although there was an embargo in place. In fact, the bug proofed to be exploited for a couple of months already. Microsoft, her former employer, had about ten years of a head start in developing a secure development life-cycle. The trick is, she said, to have plans in place in case of security vulnerabilities. You throw half of your plan away, anyway, but it’s good to have that practice of knowing who to talk to and all. She gave a few recommendations of which she thinks will enable us to write secure code. Coders should review, learn, and speak up if they feel uncomfortable with a piece of code. Managers could take up on what she called “smells” when people tend to be fearful about their code. Of course, MicroSoft’s SDL also contains many good practices. Her minimal set of practices is to have a self-assessment in place to determine if something needs security review, have an up-front threat modelling that is kept up to date as things evolve, have a security checklist like Mozilla’s or OWASP’s, and have security analysis built into CI process. 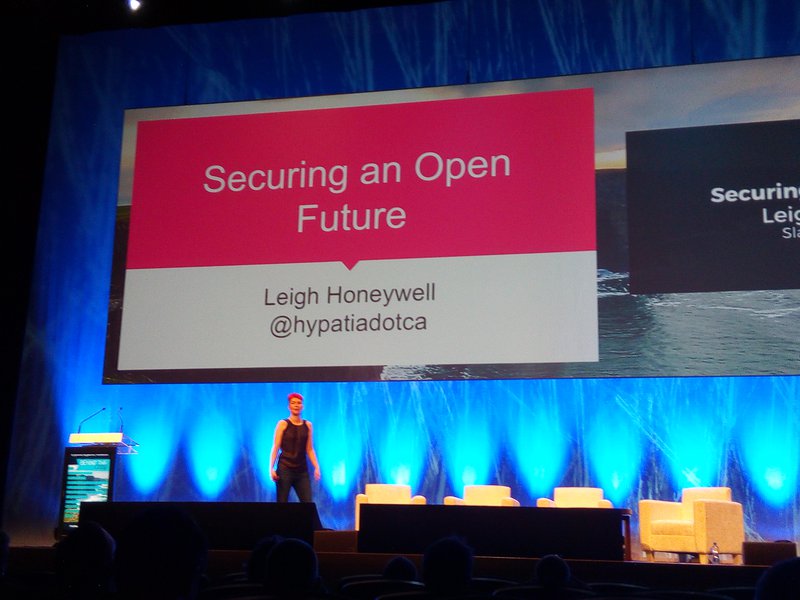 The container panel was led by Jeo Zonker Brockmeier who started the discussion by stating that we’ve passed the cloud hype and containers are all the rage now. The first question he shot at the panellists was whether containers were ready at all to be used for production. The panellists were, of course, all in agreement that they are, although the road ahead is still a bit bumpy. One issue, they identified, was image distribution. There are, apparently, two types of containers. Application containers and System containers. Containers used to be a lightweight VM with a full Linux system. Application Containers, on the other hand, only run your database instance. They see application containers as replacing Apps in the future. Other services like databases are thus not necessarily the task of Application containers. One of the panellists was embracing dockerhub as a similar means to RPM or .deb packages for distributing software, but, he said, we need to solve the problem of signing and trusting. He was comparing the trust issue with packages he had installed on his laptop. When he installed a package, he didn’t check what was inside the packages his OS downloaded. Well, I guess he missed that people put trust in the distribution instead of random people on the Internet who put up an image for everybody to download. Anyway, he wanted Docker to be a form of trusted entity like Google or Apple are for their app stores which are distributing applications. I don’t know how they could have missed the dependency resolution and the problem of updating lower level libraries, maybe that problem has been solved already… 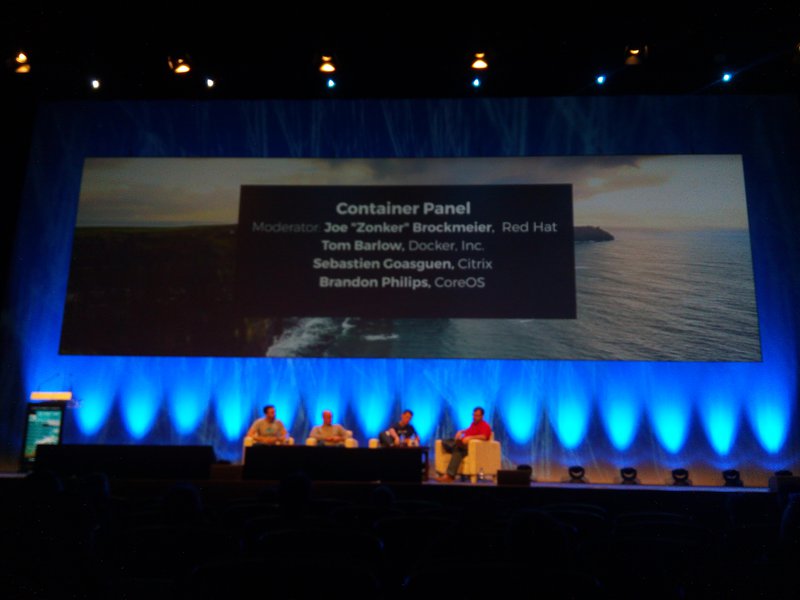 Intel’s Mark was talking on how Open Source was fuelling the Internet of Things. He said that trust was an essential aspect of devices that have access to personal or sensitive data like access to your house. He sees the potential in IoT around vaccines which is a connection I didn’t think of. But it makes somewhat sense. He explained that vaccines are quite sensitive to temperature. In developing countries, up to 30% of the vaccines spoil, he said, and what’s worse is that you can’t tell whether the vaccine is good. The IoT could provide sensors on vaccines which can monitor the conditions. In general, he sees the integration of diverse functionality and capabilities of IoT devices will need new development efforts. He didn’t mention what those would be, though. Another big issue, he said, was the updatetability, he said. Even with smaller devices, updates must not be neglected. Also, the ability of these devices to communicate is a crucial component, too, he said. It must not be that two different light bulbs cannot talk to their controller. That sounds like this rant. 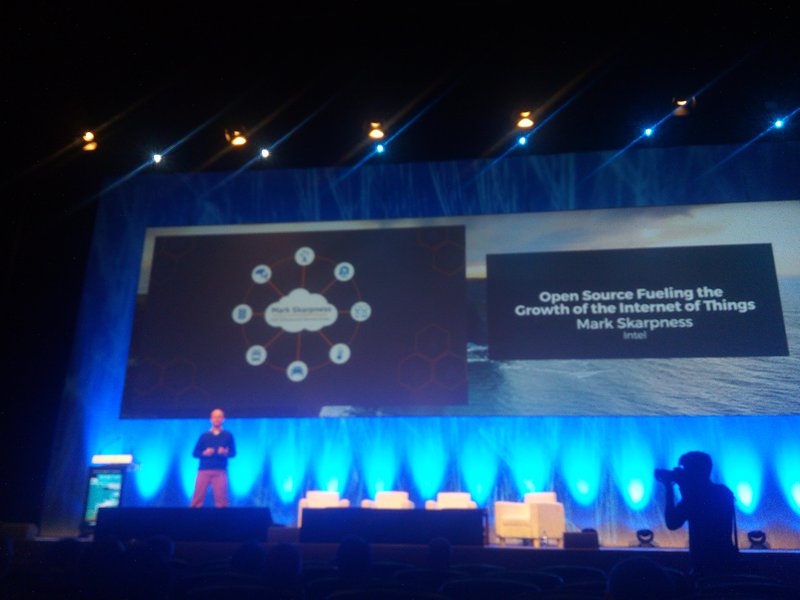 Next, Bradley talked about GPL compliance. He mentioned the ThinkPinguin products as a pristine example for a good GPL compliant “complete corresponding source”. He pointed the audience to the Compliance.guide. He said that it’s best to avoid the offer for source. It’s better to include the source with the product, he said, because the offer itself creates ongoing obligations. For example, your call centre needs to handle those requests for the next three years which you are probably not set up to do. Also, products have a typically short lifespan. CCS requires good instructions how to build. It’s not only automated build tools (think configure, make, make install). You should rather think of a script as a movie or play script. The test to use on your potential CCS is to give your source release to another developer of some other department and try whether that person can build the code with your instructions. Anyway, make install does usually not work on embedded anyway, because you need to flash the code. So make sure to include instructions as to how to get the software on the device. It’s usually not required to ship the tool-chain as long as you give instructions as to what compiler to use (and how it was configured). If you do include a compiler, you might end up having more obligations because GCC, for example, is itself GPL licensed. An interesting question came up regarding specialised hardware needed to build or flash the software. You do not need to include anything “tool-chain-like” as long as you have instructions as to the requirements what the user needs to obtain. 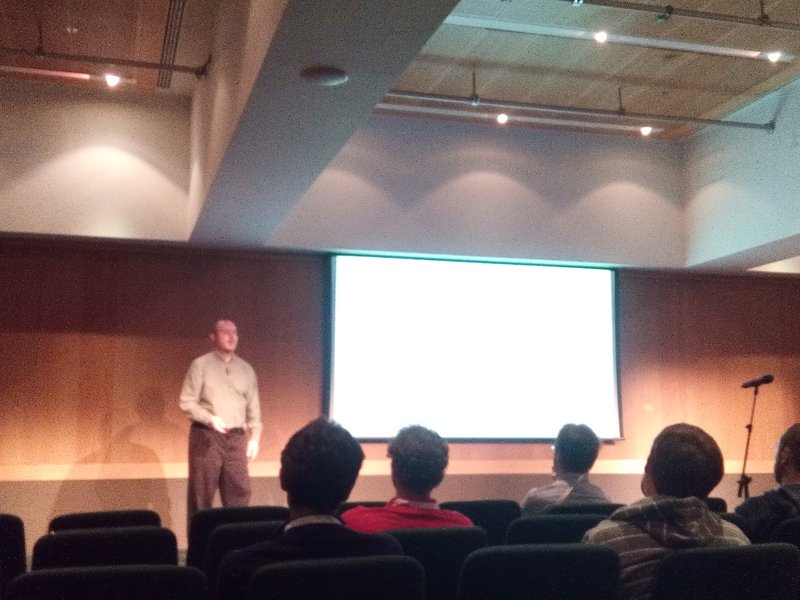 Samsung’s Krzysztof was talking about USB in Linux. He said, it is the most common external interface in the world. It’s like the Internet in the sense that it provides services in a client-server architecture. USB also provides services. After he explained what the USB actually is how the host interacts with devices, he went on to explain the plug and play aspect of USB. While he provided some rather low-level details of the protocol, it was a rather high level in the sense that it was still the very basic USB protocol. He didn’t talk too much on how exactly the driver is being selected, for example. He went on to explain the BadUSB attack. He said that the vulnerability basically results from the lack of user interaction when plugging in a device and loading its driver. One of his suggestions were to not connect “unknown devices”, which is hard because you actually don’t know what “services” the device is implementing. He also suggested to limit the number of input sources to X11. Most importantly, though, he said that we’d better be using device authorisation to explicitly allow devices before activating them. That’s good news, because we are working on it! There are, he said, patches available for allowing certain interfaces, instead of the whole device, but they haven’t been merged yet. 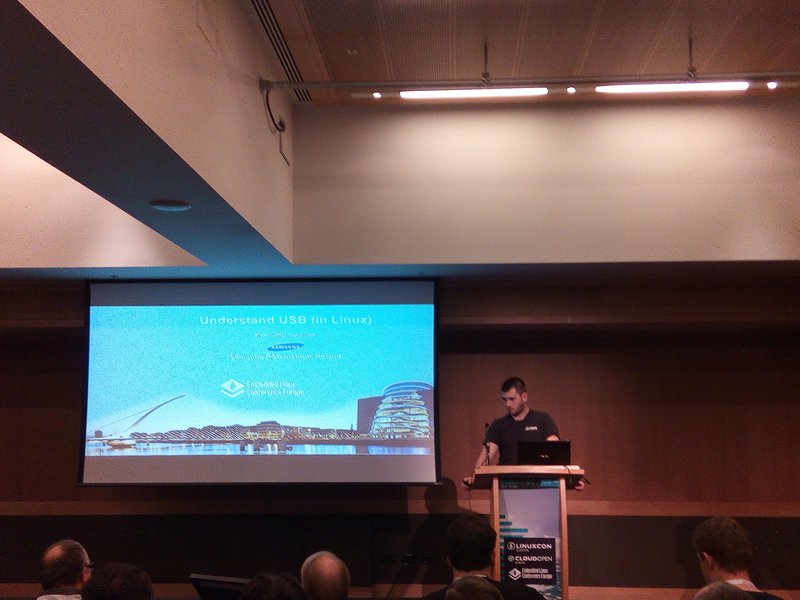 Jeff was talking about applying Open Source Principles to hardware. He began by pointing out how many processors you don’t get to see, for example in your hard disk, your touchpad controller, or the display controller. These processors potentially exfiltrate information but you don’t really know what they do. Actually, these processors are about owning the owner, the consumer, to then sell them stuff based on that exfiltrated big data, rather than to serve the owner, he said. He’s got a project running to build devices that you not only own, but control. He mentioned IoT as a new battleground where OpenHardware could make an interesting contestant. FPGAs are lego for hardware which can be used easily to build your functionality in hardware, he said. He mentioned that the SuperH patents have now expired. I think he wants to build the “J-Core CPU” in software such that you can use those for your computations. He also mentioned that open hardware can now be what Linux has been to the industry, a default toolkit for your computations. Let’s see where his efforts will lead us. It would certainly be a nice thing to have our hardware based on publicly reviewed designs. 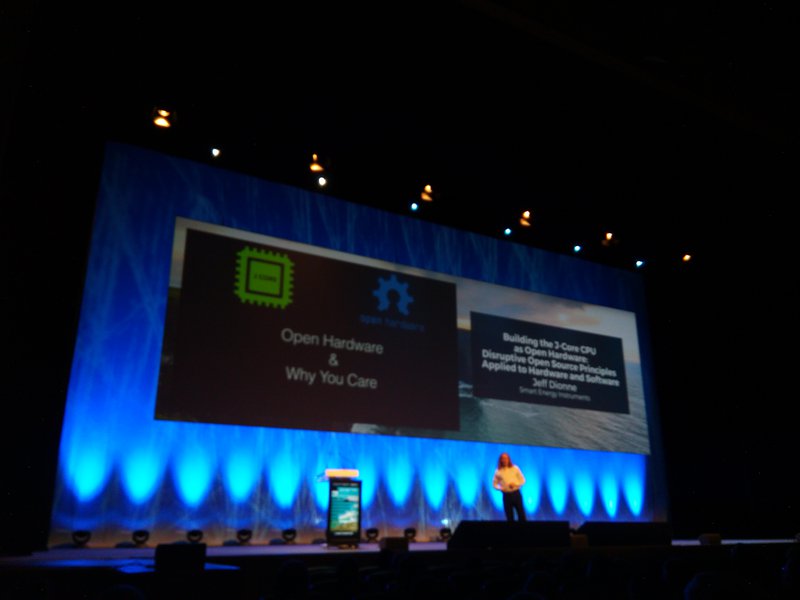 The next keynote was reserved for David Mohally from Huawei. He said he has a lab in which they investigate what customers will be doing in five to ten years. He thinks that the area of network slicing will be key, because different businesses needs require different network service levels. Think your temperature sensor which has small amounts of data in a bursty fashion while your HD video drone has rather high volume and probably requires low latency. As far as I understood, they are having network slices with smart meters in a very large deployment. He never mentioned what a network slice actually is, though. The management of the slices shall be opened up to the application layer on top for third parties to implement their managing. The landscape, he said, is changing dramatically from what he called legacy closed source applications to open source. Let’s hope he’s right. 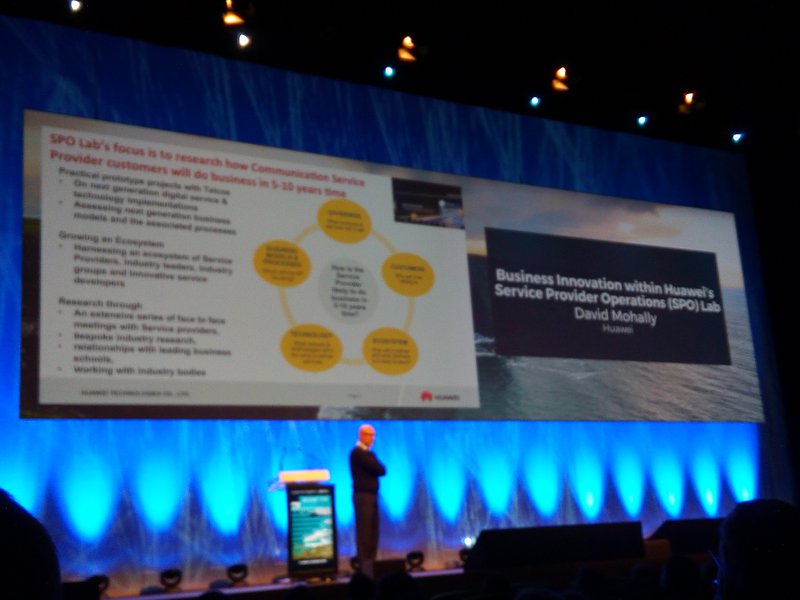 It was announced that the next LinuxCon will happen in Berlin, Germany. So again in Germany. Let’s hope it’ll be an event as nice as this one. 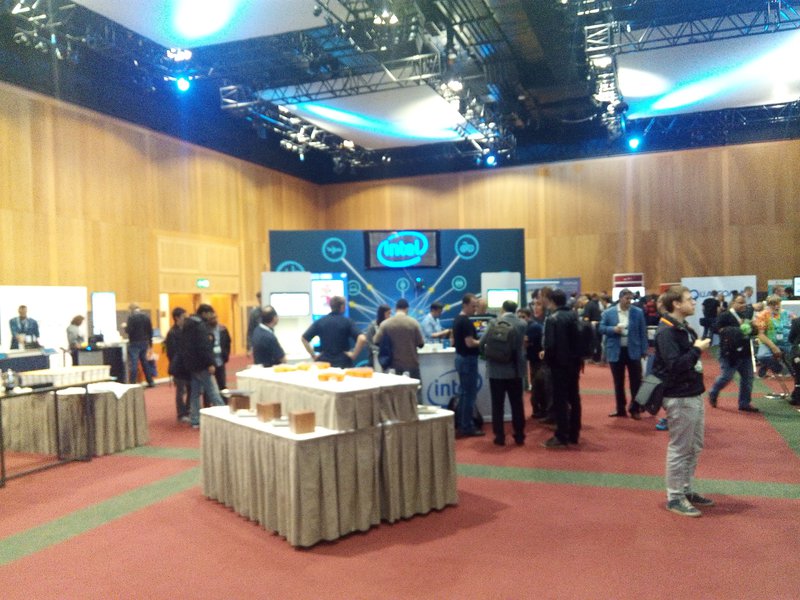 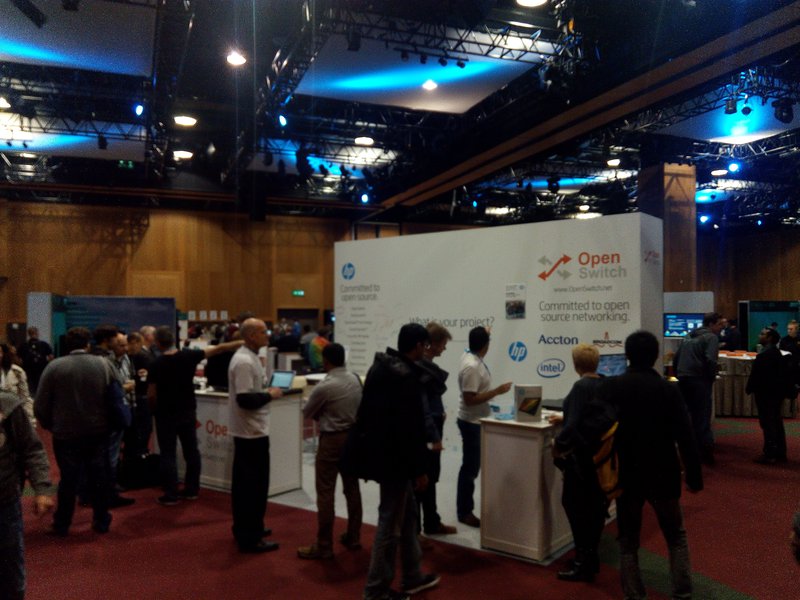 One thought on “LinuxCon Europe 2015 in Dublin”