Few weeks ago I had a talk at Cubaconf 2017 in Havanna, Cuba. It’s certainly been an interesting experience. If only because of Carribean people. But also because of the food and the conditions the country has be run under the last decades. 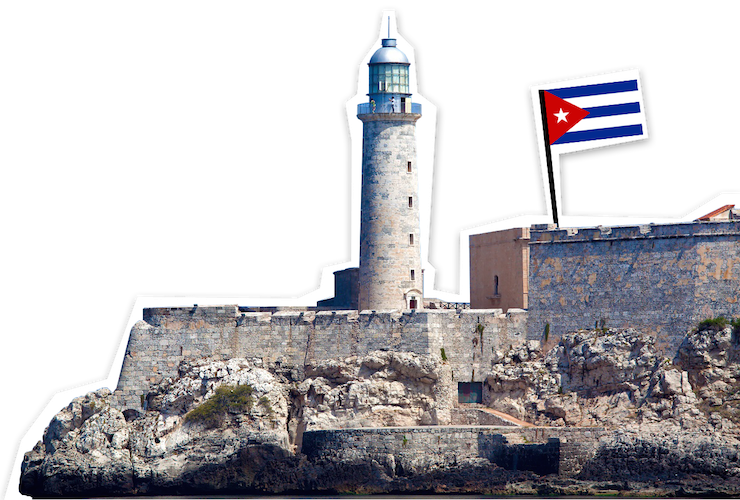 Before entering Cuba, I needed a tourist visa in form of the turist trajeta. It was bothering me for more than it should have. I thought I’d have to go to the embassy or take a certain airline in order to be able to get hold of one of these cased. It turned out that you can simply buy these tourist cards in the Berlin airport from the TUI counter. Some claimed it was possible to buy at the immigration, but I couldn’t find any tourist visa for sale there, so be warned. Also, I read that you have to prove that you have health insurance, but nobody was interested in mine. That said, I think it’s extremely clever to have one…

Connecting to the Internet is a bit difficult in Cuba. I booked a place which had “Wifi” marked as their features and I naïvely thought that it meant that you by booking the place I also get to connect to the Internet. Turns out that it’s not entirely correct. It’s not entirely wrong either, though. In my case, there was an access point in the apartment in which I rented a room. The owner needs to turn it on first and run a weird managing software on his PC. That software then makes the AP connect to other already existing WiFis and bridges connections. That other WiFi, in turn, does not have direct Internet access, but instead somehow goes through the ISP which requires you to log in. The credentials for logging in can be bought in the ISPs shops. You can buy credentials worth 1 hour of WiFi connection (note that I’m avoiding the term “Internet” here) for 3 USD or so from the dealer around the corner. You can get your fix from the legal dealer cheaper (i.e. the Internet office…), but that will probably involve waiting in queues. I often noticed people gathering somewhere on the street looking into their phones. That’s where some signal was. When talking to the local hacker community, I found out that they were using a small PCB with an ESP8266 which repeats the official WiFi signal. The hope is that someone will connect to their piece of electronics so that the device is authenticated and also connects the other clients associated with the fake hotspot. Quite clever.

The conference was surprisingly well attended. I reckon it’s been around hundred people. I say surprisingly, because from all what I could see the event was weirdly organised. I had close to zero communication with the organisers and it was pure luck for me to show up in time. But other people seemed to be in the know so I guess I fell through the cracks somehow. Coincidentally, you could only install the conference’s app from Google, because they wouldn’t like to offer a plain APK that you can install. I also didn’t really know how long my talks should be and needed to prepare for anything between 15 and 60 minutes.

My first talk was on PrivacyScore.org, a Web scanner for privacy and security issues. As I’ve indicated, the conference was a bit messily organised. The person before me was talking into my slot and then there was no cable to hook my laptop up with the projector. We ended up transferring my presentation to a different machine (via pen drives instead of some fancy distributed local p2p network) in order for me to give my presentation. And then I needed to rush through my content, because we were pressed for going for lunch in time. Gnah. But I think a few people were still able to grasp the concepts and make it useful for them. My argument was that Web pages load much faster if you don’t have to load as many trackers and other external content. Also, these people don’t get updates in time, so they might rather want to visit Web sites which generally seem to care about their security. I was actually approached by a guy running StreetNet, the local DIY Internet. His idea is to run PrivacyScore against their network to see what is going on and to improve some aspects. Exciting.

My other talk was about GNOME and how I believe it makes more secure operating systems. Here, my thinking was that many people don’t have expectations of how their system is supposed to be looking or even working. And being thrown into the current world in which operating systems spy on you could lead to being primed to have low expectations of the security of the system. In the GNOME project, however, we believe that users must have confidence in their computing being safe and sound. To that end, Flatpak was a big thing, of course. People were quite interested. Mostly, because they know everything about Docker. My trick to hook these people is to claim that Docker does it all wrong. Then they ask pesky questions which gives me many opportunities to mention that for some applications squashfs is inferior to, say, OStree, or that you’d probably want to hand out privileges only for a certain time rather than the whole life-time of an app. I was also to make people look at EndlessOS which attempts to solve many problems I think Cubans have.

The first talk of the conference was given by Ismael and I was actually surprised to meet people I know. He talked about his hackerspace in Almería, I think. It was a bit hard to me to understand, because it was in Spanish. He was followed by Valessio Brito who talked about putting a price on Open Source Software. He said he started working on Open Source Software at the age of 16. He wondered how you determine how much software should cost. Or your work on Open Source. His answer was that one of the determining factors was simply personal preference of the work to be performed. As an example he said that if you were vegan and didn’t like animals to be killed, you would likely not accept a job doing exactly that. At least, you’d be inclined to demand a higher price for your time. That’s pretty much all he could advise the audience on what to do. But it may also very be that I did not understand everything because it was half English and half Spanish and I never noticed quickly enough that the English was on.

An interesting talk was given by Christian titled “Free Data and the Infrastructure of the Commons”. He began saying that the early textile industry in Lyon, France made use of “software” in 1802 with (hard wired) wires for the patterns to produce. With the rise of computers, software used to be common good in the early 1960s, he said. Software was a common good and exchanged freely, he said. The sharing of knowledge about software helped to get the industry going, he said. At the end of the 1970s, software got privatised and used to be licensed from the manufacturer which caused the young hacker movement to be felt challenged. Eventually, the Free Software movement formed and hijacked the copyright law in order to preserve the users’ freedoms, he said. He then compared the GPL with the French revolution and basic human rights in that the Free Software movement had a radical position and made the users’ rights explicit. Eventually, Free Software became successful, he said, mainly because software was becoming more successful in general. And, according to him, Free Software used to fill a gap that other software created in the 80s. Eventually, the last bastion to overcome was the desktop, he said, but then the Web happened which changed the landscape. New struggles are software patents, DRM, and privacy of the “bad services”. He, in my point of view rightfully so, said that all the proliferation of free and open source software, has not lead to less proprietary software though. Also, he is missing the original FOSS attitude and enthusiasm. Eventually he said that data is the new software. Data not was not an issue back when software, or Free Software even, started. He said that 99% of the US growth is coming from the data processing ad companies like Google or Facebook. Why does data have so much value, he asked. He said that actually living a human is a lot of work. Now you’re doing that labour for Facebook by entering the data of your human life into their system. That, he said, is where the value in coming from. He made the the point that Software Freedoms are irrelevant for data. He encouraged the hackers to think of information systems, not software. Although he left me wondering a bit how I could actually do that. All in all, a very inspiring talk. I’m happy that there is a (bad) recording online:

I visited probably the only private company in Cuba which doubles as a hackerspace. It’s interesting to see, because in my world, people go and work (on computer stuff) to make enough money to be free to become a singer, an author, or an artist. In Cuba it seems to be the other way around, people work in order to become computer professionals. My feeling is that many Cubans are quite artsy. There is music and dancing everywhere. Maybe it’s just the prospects of a rich life though. The average Cuban seems to make about 30USD a month. That’s surprising given that an hour of bad WiFi costs already 1 USD. A beer costs as much. I was told that everybody has their way to get hold of some more money. Very interesting indeed. Anyway, the people in the hackerspace seemed to be happy to offer their work across the globe. Their customers can be very happy, because these Cubans are a dedicated bunch of people. And they have competitive prices. Even if these specialists make only hundred times as much the average Cuban, they’d still be cheap in the so called developed world.

After having arrived back from Cuba, I went to the Rust Hackfest in Berlin. It was hosted by the nice Kinvolk folks and I enjoyed meeting all the hackers who care about making use of a safer language. I could continue my work on rustifying pixbuf loaders which will hopefully make it much harder to exploit them. Funnily enough, I didn’t manage to write a single line of Rust during the hackfest. But I expected that, because we need to get to code ready to be transformed to Rust first. More precisely, restructure it a bit so that it has explicit error codes instead of magic numbers. And because we’re parsing stuff, there are many magic numbers. While digging through the code, other bugs popped up as well which we needed to eliminate as side challenges. I’m looking much forward to writing an actual line of Rust soon! 😉