Been some time now since my last update on what is happening in Fedora Workstation and with current plans to release Fedora Workstation 28 in early May I thought this could be a good time to write something. As usual this is just a small subset of what the team has been doing and I always end up feeling a bit bad for not talking about the avalanche of general fixes and improvements the team adds to each release. 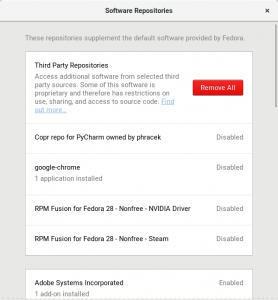 We have also been working with Google to try to get Chrome included here and we are almost there as they merged for instance the needed Appstream metadata some time ago, but the last steps requires some tweaking of how Google generates their package repository (basically adding the appstream metadata to their yum repository) and we don’t have a clear timeline for when that will happen, but as soon as it does the Chrome will also appear in GNOME Software if you have 3rd party software enabled.

As we speak all 3rd party packages are RPMs, but we expect that going forward we will be adding applications packaged as Flatpaks too.

Finally if you want to propose 3rd party applications for inclusion you can find some instructions for how to do it here.

Virtualbox guest
Another major feature that got some attention that we worked on for this release was Hans de Goedes work to ensure Fedora Workstation could run as a virtualbox guest out of the box. We know there are many people who have their first experience with linux running it under Virtualbox on Windows or MacOSX and we wanted to make their first experience as good as possible. Hans worked with the virtualbox team to clean up their kernel drivers and agree on a stable ABI so that they could be merged into the kernel and maintained there from now on.

Firmware updates
The Spectre/Meltdown situation did hammer home to a lot of people the need to have firmware updates easily available and easy to update. We created the Linux Vendor Firmware service for Fedora Workstation users with that in mind and it was great to see the service paying off for many Linux users, not only on Fedora, but also on other distributions who started using the service we provided. I would like to call out to Dell who was a critical partner for the Linux Vendor Firmware effort from day 1 and thus their users got the most benefit from it when Spectre and Meltdown hit. Spectre and Meltdown also helped get a lot of other vendors off the fence or to accelerate their efforts to support LVFS and Richard Hughes and Peter Jones have been working closely with a lot of new vendors during this cycle to get support for their hardware and devices into LVFS. In fact Peter even flew down to the offices one of the biggest laptop vendors recently to help them resolve the last issues before their hardware will start showing up in the firmware service. Thanks to the work of Richard Hughes and Peter Jones you will both see a wider range of brands supported in the Linux Vendor Firmware Service in Fedora Workstation 28, but also a wider range of device classes.

Server side GL Vendor Neutral Dispatch
This is a bit of a technical detail, but Adam Jackson and Lyude Paul has been working hard this cycle on getting what we call Server side GLVND ready for Fedora Workstation 28. Currently we are looking at enabling it either as a zero-day update or short afterwards. so what is Server Side GLVND you say? Well it is basically the last missing piece we need to enable the use of the NVidia binary driver through XWayland. Currently the NVidia driver works with Wayland native OpenGL applications, but if you are trying to run an OpenGL application requiring X we need this to support it. And to be clear once we ship this in Fedora Workstation 28 it will also require a driver update from NVidia to use it, so us shipping it is just step 1 here. We do also expect there to be some need for further tuning once we got all the pieces released to get top notch performance. Of course over time we hope and expect all applications to become Wayland native, but this is a crucial transition technology for many of our users. Of course if you are using Intel or AMD graphics with the Mesa drivers things already work great and this change will not affect you in any way.

Flatpak
Flatpaks basically already work, but we have kept focus this time around on to fleshing out the story in terms of the so called Portals. Portals are essentially how applications are meant to be able to interact with things outside of the container on your desktop. Jan Grulich has put in a lot of great effort making sure we get portal support for Qt and KDE applications, most recently by adding support for the screen capture portal on top of Pipewire. You can ready more about that on Jan Grulichs blog. He is now focusing on getting the printing portal working with Qt.

Wim Taymans has also kept going full steam ahead of PipeWire, which is critical for us to enable applications dealing with cameras and similar on your system to be containerized. More details on that in my previous blog entry talking specifically about Pipewire.

It is also worth noting that we are working with Canonical engineers to ensure Portals also works with Snappy as we want to ensure that developers have a single set of APIs to target in order to allow their applications to be sandboxed on Linux. Alexander Larsson has already reviewed quite a bit of code from the Snappy developers to that effect.

Performance work
Our engineers have spent significant time looking at various performance and memory improvements since the last release. The main credit for the recently talked about ‘memory leak’ goes to Georges Basile Stavracas Neto from Endless, but many from our engineering team helped with diagnosing that and also fixed many other smaller issues along the way. More details about the ‘memory leak’ fix in Georges blog.

We are not done here though and Alberto Ruiz is organizing a big performance focused hackfest in Cambridge, England in May. We hope to bring together many of our core engineers to work with other members of the community to look at possible improvements. The Raspberry Pi will be the main target, but of course most improvements we do to make GNOME Shell run better on a Raspberry Pi also means improvements for normal x86 systems too.